National
Can this picture of a majestic bin chicken out rate the Today show?
February 8, 2019 The Today show’s TV ratings yesterday were a measly 177,000 viewers. That’s about one sixth of the audience the Chaser website sees on a good day. Hell, it’s less than a lot of kids making Youtube videos on a $5 a week allowance. Which got us thinking – just how low is the bar to match the Today show’s ratings?

To test this, we’ve decided to post this image of an ibis eating out of a bin that we found on Google image search, and we’ll be updating the number of views this posts gets hourly for the rest of the day until we beat the Today show. 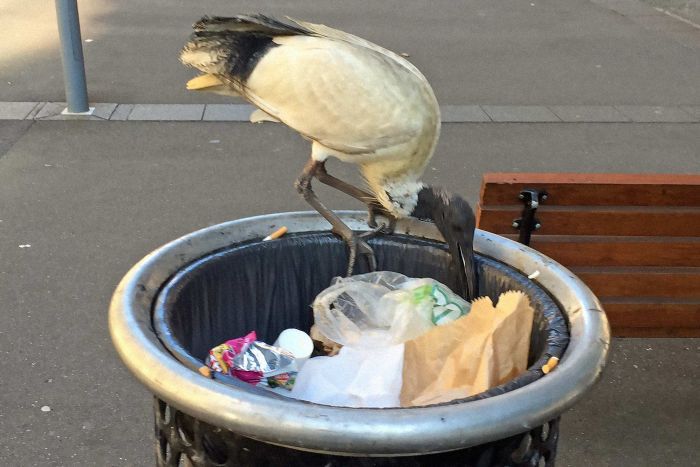 Also if you want us to help beat the Daily Telegraph’s measly print subscription numbers of just 192,000, be sure to subscribe to the Chaser Quarterly. At just $5 per month, that’s some great savings on kindling and bin liners.

The noble winged car horn has gathered an impressive 7000 viewers in its first hour as an insufferable breakfast show host, but there’s still plenty of time for the Ibis to rule the roost and take out the top perch and the viewers are growing fast. Be sure to share the anointed long pigeon on your social media to help it take out the top spot.

Also shout out to Elle Snow for this quality contribution:

The egyptian god of wheely-bins has gained a name! Say hello to Australia’s newest Breakfast Show Host ‘Karl Stealinyochip’. In other news, the downunder leather dove has amassed a following of 15,000 loyal viewers since its debut on the internet this morning, making it officially more popular than the entire show run of [name of show censored because some of our best friends were Tonightly writers].

Also, going by the metrics that the Daily Telegraph uses to calculate its newspaper readership, we can claim our actual numbers are 4x as large because we assume every reader will show this image to at least four other people which means Australia’s favourite bin-chook just skyrocketed to a record 60,000 viewers! We’re almost there.

To celebrate, we paid someone in India $2 for this amazing photoshop job: 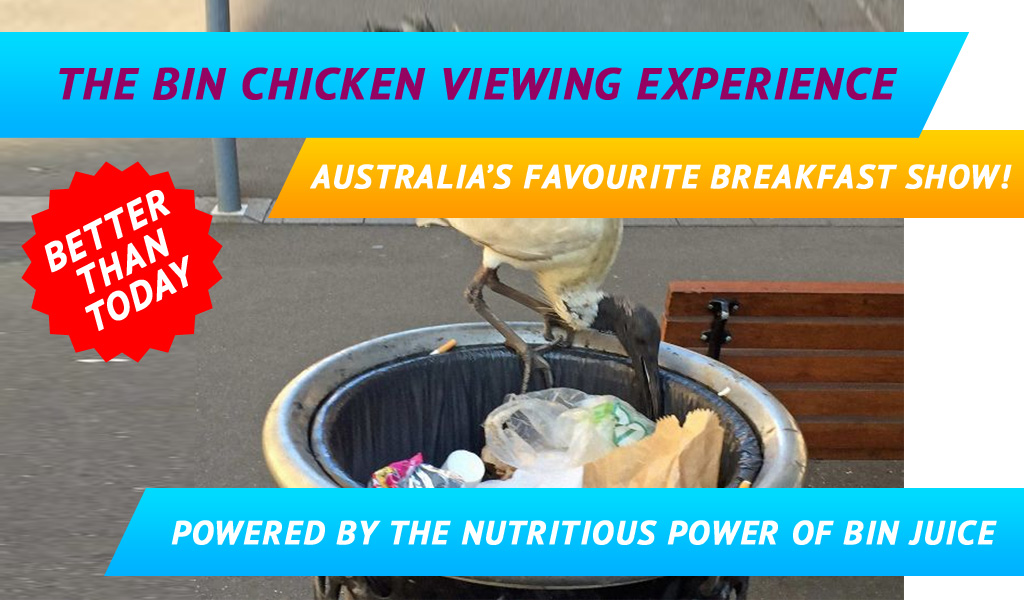 The Daily Show’s Ronny Chieng has liked the campaign on twitter so the Ibis has officially cracked the American TV market!

Also yes we missed an hour, turns out breakfast beers are a bad idea, but strewth this BBQ bandit is a ratings bonfire – 33,000 views and counting (that’s 132,000 views in Daily Telegraph numbers). According to Wikipedia this means that we probably have the entire population of Dubbo watching our wonderbird.

We are all far to drunk to work a computer right now, but if anyone wants to start an online petition to give the chook it’s own prime-time TV show email us a link at [email protected] and we’ll happily give it a spruik.

To sign off on this hour we’ll leave you with this thought: Actors used to be considered the scum of the earth but are now worshiped like gods, so they’ve had the exact reverse career trajectory of ibises.

It has been very kindly pointed out to us by the internet that we are, in no uncertain terms, idiots. We’d only been counting the views on our actual website, and not our social reach! Now, it should be pointed out that we believe including people who just happened to glancingly view the ibis while scrolling through their newsfeeds is definitely cheating, and as a result we will definitely be including them in the ratings.

That means the total number of people who have viewed the bin chicken is now:

No idea about the Reddit views because they removed that feature in an “upgrade” (but we did make it to the front page!?!) So lets say the upvotes (5000) x 2

152, 540 views of the long billed bin bastard. Wow. If we hadn’t just shown the working of how we fudged that number, it would be really impressive! We’re still aiming to hit that sweet 180,000 view mark on our website alone though, so keep those clicks coming.

We sent Charles out for supplies many hours ago, and our hope for his safe return dwindles by the minute. We may be forced to eat the dogs. Send snacks.

In lighter news, we’ve hit 100,000 views! Holy cow, I think it’s safe to say we very much expected this and are not at all shocked. We’re toe to toe with CSI: MIAMI for viewer counts now, though it’s safe to say the ibis has far surpassed them in on screen charisma.

For comparison, the population of Tonga, which has a seat at the UN, is just 106,479 people. Are we saying this picture of an ibis eating out of a bin should therefore also have a seat at the UN? Almost certainly yes.

Here’s some other great suggestions for roles this iconic dumpster-diving dodo should be promoted to:

General rule of one vote for every ten views.

As for the official Chaser website numbers, we’ve now realised that nobody else can see the stats but us so we can say whatever we want any nobody can disprove it. As such we now have over a billion views, and are without a doubt the single biggest media conglomerate on the planet, surpassing even Disney. We are calling this the Netflix rating method.

Well it’s been 24 hours, and you’ve all been waiting with baited breath, and now the final numbers are in, and it’s both good news and bad news.

The mighty trashodactyl proved mighty popular, and in the end that proved to be it’s downfall. While the public were more than onboard to see this ibis soar to victory, as usual the secret powers that be pulling the strings had a different idea.

Around 5pm yesterday our gentle feathered friends campaign came crashing down as, in a seemingly co-ordinated campaign, the giants of silicon valley one by one banned what had clearly become a challenger to their dominance of people’s screens.

First came Reddit. Though /r/Australia threw their weight behind the campaign to deify the bin chicken, sending it to the front page of the website, at the height of its popularity the bin chicken was booted from the platform without an explanation. Are we suggesting the perhaps the rich and powerful today show hosts paid someone to off their successful challenger? We think the evidence speaks for itself.

Next came Facebook, who, terrified of the power being amassed by the Sydney skyrat, demanded we pay money to keep our post appearing in people’s feeds, despite it performing better than “99% of posts on the site”.

Then in a final smackdown, just as the ibis began to see the light at the end of the tunnel, tragedy struck. Google, evil world dominating IT Giant who we entrusted with the task of counting every single one of Karl Stealinyochips loyal followers, pulled a stunt more underhanded than an Aussie cricketer, declaring that the wild popularity of our beloved Ibis was impossible, and must instead have been a botnet designed to generate ad revenue. At the stroke of midnight, just as the title of greatest Breakfast show ratings was in reach, Google chopped down the reported view count to a measly 40,000, burying our bin chicken in a decision so garbage even an Ibis couldn’t eat it’s its way out.

BUT the bin Chicken was not beaten yet. Because it turns out we had one other secret traffic measuring tool up our sleeves that nine’s deep pockets couldn’t bribe their way out of.

And so we can proudly declare that according to AWstats, the Chaser website’s own internal traffic monitor, our legendary Bin Chicken enjoyed a whopping 158,202 views in just 24 hours! Combine this with the 5.4 thousand likes and shares on Facebook, 10.5 thousand upvotes on Reddit, and 12 retweets on twitter, and we think it’s safe to say that while we may not have managed to out rate Today in the end, the fact that one stupid picture of a bird could basically match the viewership of a nationally broadcast breakfast show with a budget that rivals the GDP of some nation states, has more than proven our point.

So that’s it for Karl Stealinyochip for now, but with an audience of this size, we’re sure we’ll see him again some day soon, probably at the Logies, where he’ll feel right at home wallowing in all the trash Channel Nine puts out.

Well, the website may have stumbled at the finish line, but we’re proud to say the Facebook numbers for the ol chook just came in, and lo and behold:

Mission accomplished. Nine, time to give this bird a primetime contract.