There are many moments in Australian history that are overlooked, or completely forgotten. The series kicks off with an account of the first soccer match between Indigenous Australians and white settlers.

The inaugural ‘Hastings Hill Constabulary v Natives’ football match took place in 1821, but its origins stretch back to 1819. It was in that year that Colin Patterson, a policeman from Dorset, set sail for Australia, equipped with nothing more than a sense of adventure, a soccer ball, and niggling case of syphilis.

With treatment, Patterson’s syphilis subsided; not so his passion for the round-ball game. No sooner had he been given his badge and assigned a horse at the Hastings Hill police unit, he went about establishing a Wednesday evening after-work kick about.

The idea was met with opposition at first – Wednesdays were typically reserved for paperwork and “on the spot inspections” at the local whorehouse. But in time the idea caught on. Indeed by the middle of 1820, the weekly scratch matches on the fields surrounding the station were the talk of the town, and were even profiled in the Hastings Hill Gazette.

Hastings Hill townsfolk, whose lives were otherwise a monotonous mix of small-talk and sheep farming, would look forward to Wednesdays, when hundreds would congregate at the police station to watch and bet on the high-speed five-a-side games. For the policemen themselves, the football was a reminder of home, and was a chance to blow off some mid-week steam. Whorehouse investigations were moved to Thursdays.

Wiry, socially awkward and with an impeccable public school education, Patterson was the obvious choice as both coach and administrator, and he soon gained a reputation as a tough but respected leader. Under his tutelage the standard of football quickly improved and what began as a rag-tag bunch of novice players, soon became a well-drilled squad of steely defenders, lightening-quick wingmen, and lethal strikers. It was only a matter of time before talk of a game against the natives emerged. 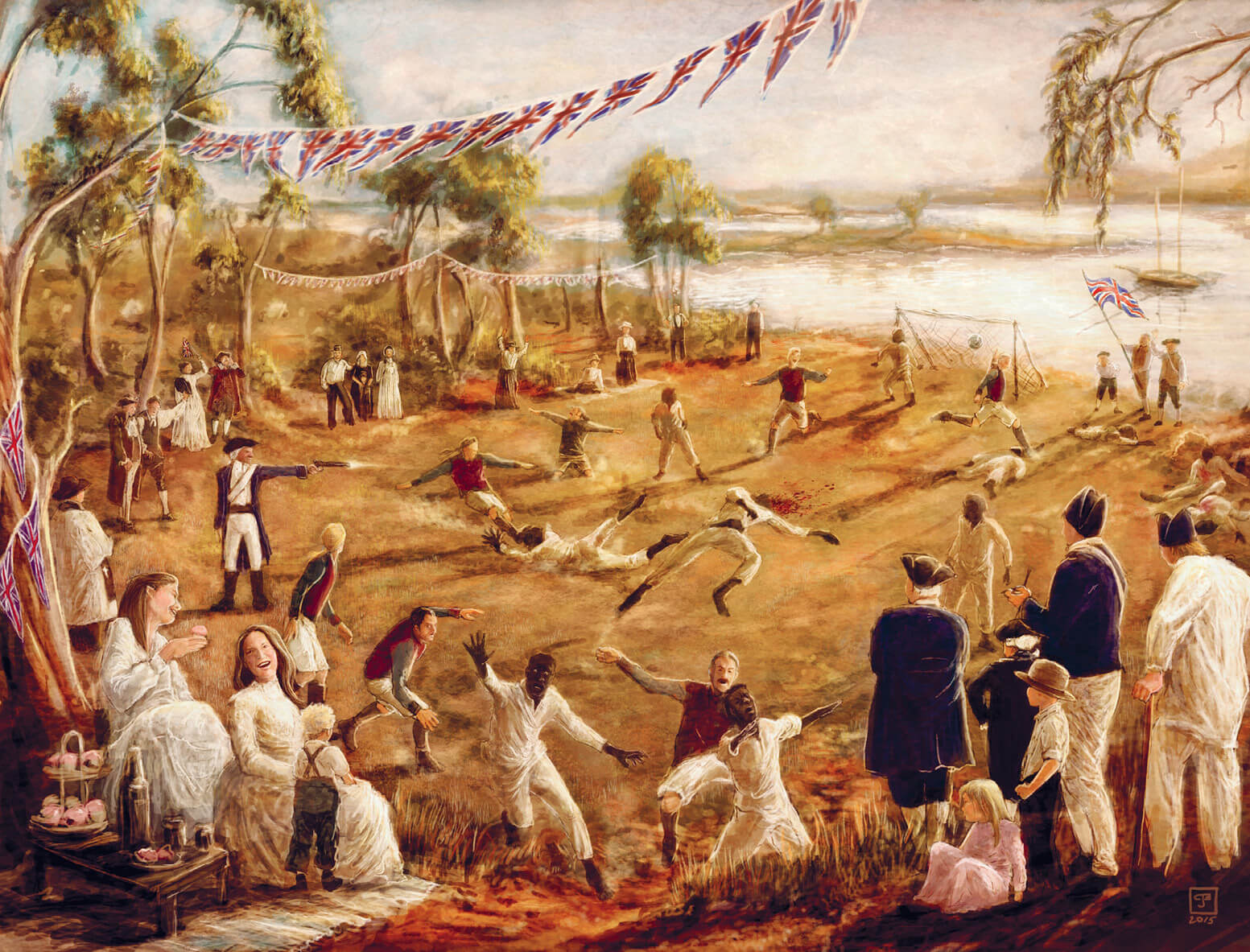 The Aborigines of Hastings Hill largely kept to themselves. A smallpox epidemic in 1811 had wiped out four-fifths of their population, but otherwise they seemed a happy, content peoples.

In the early days of settlement white men had traded cigarettes with the Aborigines in return for bark carvings and large tracts of cultivatable land. However, with the land fully accounted for within a year, and bark carvings only ever being a passing fad among female settlers, communication between the two groups had all but stopped by 1821.

Here was an opportunity, Patterson reasoned, to rebuild old
ties and civilise, at least to some degree, the native population. He decided to approach the tribe to sell the idea of a cross-cultural friendly. In his diary he describes the moment he met the Aboriginees. “Here before me stood scores of grown men with sharpened spears, while I held nothing but a football and a rifle. That the men immediately put down their spears as I approached says something of the universal appeal of modern football – we hit it off from that very first moment”.

A date for the game was set, and preparations begun. While most townsfolk were excited about the upcoming derby, there was some trepidation. Would the natives be clothed? What if the policemen were to catch diseases? And how on earth to explain the complexities of the offside rule to a people unable even to conceive the basics of modern farming?

The problem of the native clothing, at least, was soon solved thanks to the ingenuity of a local woman named Mary Wonslow. She hatched an ambitious plan to sew matching jumpers and leggings made from discarded linen from the local hospital’s smallpox wing, and solicited the help of other ladies in the region to complete the task. The weekly working bees to create the twelve football kits, complete with red and gold striping and hand-embroided match-day insignia, became a fondly remembered part of the pre-match build up.

As game day approached, training sessions at the Constabulary increased – first to Mondays and Wednesdays, and then weekday mornings and all day Saturdays. In the week before the match, the station was closed to allow the men to focus more fully on their corner throw-in structures and defensive set plays. Due to a lack of written documentation at the time, the training schedule of the Aborigines is unfortunately lost to history.

Game day was not without its hiccups. The start time of 2pm had to be pushed back to 3pm (the Aborigines forgot to write down the time), and there was some confusion when the Aborigines didn’t bring the match ball as promised (in the end the policeman reluctantly agreed to use one of their training balls). But once underway, the match was a colourful display of speed, skill and – in the case of the Aborigines – slight bewilderment. The Hastings Hill Gazette later described the game as “one-sided, but compelling”; the local mayor said it was “pure entertainment”. Patterson shot eight goals.

The massacre of the 12-member Aboriginal team, at the conclusion of the derby, shared many of the characteristics of the game that preceded it: fast, precise and with an element of surprise. The Aborigines’ defence was lacklustre and they were shockingly out of position, as they had been all afternoon. Patterson
shot eight.

It would be the last time the Hastings Hill Aborigines turned up to a game without a match-day football. And, to the disappointment of many, there would be no re-match – at least not with that particular Aboriginal team. Nevertheless, that first game, and the humble ground
on which it was played (since built over with a modern stadium) will forever hold a special place in Australian soccer history.